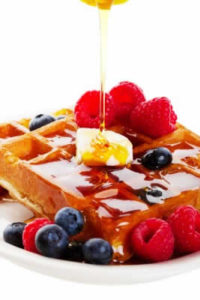 [Updated 1 June 2020]One of the best buys for cooking burgers, steaks, chops, and hot panini rolls, the Cuisinart 5 1 Griddler Combo is a winner in our house and it gets used a heck of a lot. Waffle maker removable plates make it very versatile as a cooker and I simply love good waffles.

We bought one because, after lunch at friends where she made delicious fruit and maple syrup waffles, I was on a bender to have one and nothing but the box arriving was going to mess with it!

Best Seller In The Category

I did check quite a few other indoor Griddler reviews, nothing moved me on to another product and a quick read of  a few of the 3000 plus reviews and numbers sold will tell you why I’m so besotted – just look at this:

Called the 5 1 because it offers five cooking functions (you wouldn’t have guessed that now would you!), the Cuisinart may be bijou but it packs in a whole lot of features which make indoor griddle cooking a breeze, and just as good – it’s easy to clean afterward.

It can be used as a full griddle, half grill/half griddle, contact grill, a panini press, or as a full grill, all of which offers you pretty much total flexibility in what you can put on it. Personally, with eggs, I like a nice non-stick frying pan and sometimes funky shaped egg molds to shape the eggs. The other thing with frying pans is you can use a cooking oil spritzer and save a bunch of calories – how many of us haven’t had eggs served up swimming in grease? Eww.

When I found out a friend had one, she was basically hounded and pestered into inviting me to lunch so I could get a good look at her griddle – Ellie has the older model which she truly values as a cooking appliance, but it carries several as she puts it ‘crappy little flaws’. These include having to position the fat catching tray under the drain in just the right place or have a greasy puddle to clear up, and her other moan is the two spare cooking plates to store.

The company designers have obviously listened! 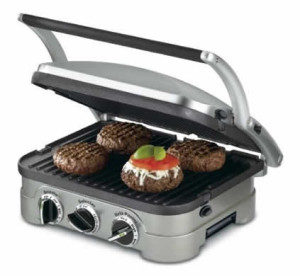 The new and updated  Cuisinart 5 1 has now got a removable fat tray sitting under the drain which is easy to pull out, clean and replace. They’ve also cut storage space in that now you just flip the one set of plates over, it used to come with another set of flat griddle plates and they have to be stored somewhere when you’re not using them.

The cooking plates are easy to snap in and out, there’s a release button which pops them up for you.

I really love the adjustable floating pull down lid which allows you to move it higher or lower according to food thickness.

This is a clever feature and it means you can bring the upper griddle right down on burgers or steaks and just keep it quite close but not touching when cooking delicate food like fish.

Remember if you are using as a contact cooker on both sides like this, you should keep food close to the same thickness for even cooking.

Also, you’re advised to use boneless steaks and poultry joints for the same reason. My friend completely ignores this and checks the meat is cooked with a cooking thermometer – this is not a recommendation, but it is what a lot of people do and it is perfectly safe.

Lamb chops or any steak where the bone is at the edge should be okay anyway. I ought to mention that there is a release lever to allow the lid to extend right back and flat, so you can cook on both plates in this orientation. 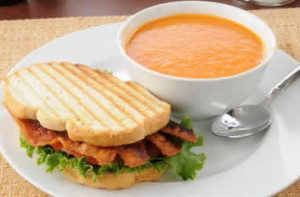 The new style of interchangeable cooking plates makes it easy for you to customize the layout of your griddle to any combination you like.

The cooking plates used to be a fiddle to remove and replace, but again the Cuisinart designers have listened to customer grumbles and corrected an inconvenient flaw.

Removable parts including the drip tray are dishwasher safe which obviously includes the cooking plates. Personally, I wouldn’t put griddle plates into the dishwasher because continually exposing them to the strong chemicals in dishwasher detergent eventually damages the non-stick surface coating.

Instead, use the tool provided to scrape off any bigger food particles, then a quick soak in hot soapy water will loosen the residual bits and you can then rub clean, rinse and dry. If you treat these plates with care the surface will last years longer.

There is one more huge advantage to a small appliance like this – just like my precious halogen oven, the running costs are cheap. Because you’re only heating a small area compared to a main cooker oven or grill, two things work to your advantage.

Firstly it gets up to temperature much faster which saves waiting around and uses less power. Secondly, pulling the floating top of the griddle down on food will cook it on both sides at once making the whole operation faster and more economical than a conventional grill or stove-top griddle iron.

This griddle comes with a gourmet recipe book plus the aforementioned handy tool to scrape the non-stick griddle plates off with. It also carries a limited three-year warranty.

Just so you know, the temperature on the griddle can be adjusted from 200°F up to 425°F which is plenty hot enough and the thermostat is more accurate than other indoor griddles can boast about. It’s as well to be aware that griddles don’t usually reach the upper temperatures until the lid is pulled down over food.

Cuisinart makes a brilliant rotisserie oven with digital touchpad control, so why not use the same great feature here?

I have a ‘thing’ about knobs and dials on cooking appliances because they collect food particles and grease from your fingers, which is then downright awkward to remove.

Contrast that with a quick wipe over on smooth digital controls and you can see what I mean. At least the knobs aren’t ribbed – those need a toothbrush to clean them properly.

That aside, certainly the predecessor my colleague and friend has is very well made and feels solid to cook on – I so hate hot things skidding around as I’m trying to add or remove food. It also has one other magical trick up its heating element…it’s a waffle griddle combo. 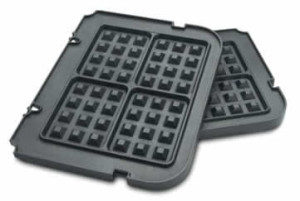 They should have called it the Cuisinart 6 1 because you can also buy waffle plates for the Cuisinart GRN series and turn this into a complete waffle maker in seconds. Oh Yeah!

I think from the reviews that a lot of people do this and dump their one function waffle maker, my pal agrees the waffles are excellent, no, she didn’t have a waffle maker to dump, and yes, she did make me waffles for lunch which was what sold it.

First homemade soup with hot panini rolls followed up by the most awesome waffles – as good as any I’ve eaten anywhere.

The plates are identical in that they release and snap in and out exactly the same way using the release button – these are one-sided though so nothing on the back. Covered in a high-quality non-stick coating they are designed to make 4 thick hearty Belgian waffles with deep pockets to hold the topping.

Don’t forget the maple or butter pecan syrup to drizzle over the fresh berries. Yum!

As with the other removable griddle plates, they are dishwasher safe, but as ever, I’d say be kind to them and wash by hand, they will repay by lasting sometimes years longer.

All non-stick coating comes off eventually because heat expands and contracts the metal – so will a dishwasher and for me, you could be speeding up the gradual degeneration process. Because these are non-stick you don’t need to add fat or season them – which is not to say you can’t add fat or butter with the waffles, of course, you can.

An excellent waffle recipe book is included and I see that one enterprising lady is thinking of mixing up the dry recipes provided and giving them as gifts – what a good idea, they’d sell well at fundraisers too. There are more tasty recipes for the griddle here at yummly.com – I’ve used several and been inspired by several more.

The Cuisinart 5 1 Combo Griddler is the best small appliance I’ve bought for some time and I can easily see it replacing several of the more bulky appliances currently on the counter because it does so many things in one. As far as I know, it is the only small indoor griddle with waffle maker removable plates that simply snap in and out like this on a release button – brilliant. It makes a great gift for newlyweds, first home owners, anyone who loves cooking.

Update – Currently the Cuisinart 5 1 Griddler is on offer at Amazon – only $59,  If you are thinking of getting one, do it while the offer is still on – the waffle plates are down in price too.