[Updated 1 June 2020]Right now tomatoes and bell peppers are up there with the best of the crops, and this really easy stuffed bell peppers recipe uses them in a delightful combination you can serve as a light meal, a starter or as a vegetable accompaniment to meat and poultry. 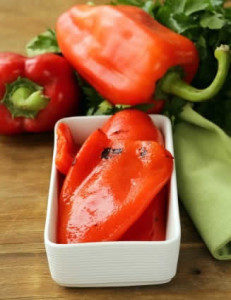 This doesn’t work at all with green peppers, of course, you can try it but I don’t think you’ll make it again, nor want to post it on your blog!

Using yellow or orange peppers is possible if you really can’t get red, but the end result when I’ve tried it has been too sweet and lost the special earthy depth of flavor achieved with ripe red ones.

*  The original recipe calls for anchovies and I for one totally hate them, so I leave them out.

*  The original recipe does not call for olives – we love them and think they add to the dish, but again add or remove as you wish.

You can vary the amounts of black pepper, garlic, olives, and cheese to taste but you’ll always get better results with really ripe sweet peppers and tomatoes – the richness of flavor is a world different with ripe fresh produce.

Note that with this dish (and any using olive oil) you don’t want the smoking point of olive oil to be reached. It’s better to cook for longer to pull out all the flavors, so keep the heat to medium and let the subtle flavor of olives sink through the peppers and tomatoes.

Salt – if you use anchovies you won’t need salt and anyway, I’d leave people to add it at the table if they feel it necessary.

Add a cube or two of mozzarella or any cheese of your choice before cooking – alternatively, Parmesan sprinkled over about halfway through cooking, adds a lovely cheesy, crusty twist to the taste.

I absolutely promise the liquid at the bottom of the dish is the best part and divine mopped up with sourdough bread, or a chunk of black pepper and cheesy bread – you can find the bread recipes here.