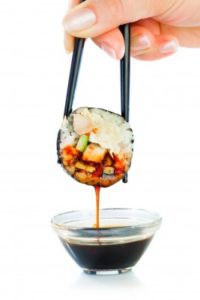 [Updated 1 June 2020]Having watched a food program where the presenter and guest delighted in eating raw fish, I swore sushi would never cross my fridge door, never mind land on my plate. I didn’t even know you could buy a Sushi Chef Sushi Making Kit (did you?).

Eat With Your Stomach Not Your Eyes!

Wow – was I wrong to turn up my nose. Of course, not everyone in Japan likes and eats fish (common sense should have told me that).

In fact, the brilliantly good news for me was learning sushi is also served with cooked meat, chicken and vegetarian toppings including egg and mushroom. Now that’s sushi I can get stuck into.

Being pretty uninformed on Japanese cuisine and in good company with many others, I believed Sushi actually meant raw fish which is not true at all – actually Sushi means a range of foods prepared using vinegared rice and the fillings or toppings as they are known, are usually presented as fish in the media, because it is the most well known.

There are several different ways sushi is served including the most familiar seaweed rolls, known as maki (which means rolls funnily enough), the seaweed is known as nori and it’s stuffed with the rice mixture then rolled using a sushi mat.

Nigiri Is Quite Easy To Make 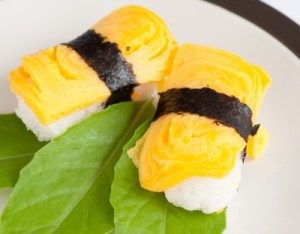 Nigiri is commonly served as a small hand molded clumps of rice with the topping smoothed on the top, sushi prepared like this is a more filling main meal as a rule.

For anyone dieting, I must say sushi is as filling and healthy a meal as anyone could wish for – great for diabetics too, but watch the sugar in the sauces.

Not tried this yet, but keep meaning to – Torfu. Torfu is used to make a pouch into which the toppings are stuffed (inari) and a popular party style sushi is called chirashi-zushi which translates into scattered sushi. It sounds easy-ish to have a go.

Sushi is prepared with both visual beauty and delicate fragrant flavors at the heart of it – appearance should be as appealing as flavor (OMG you should have seen the first attempt!!).

Overall taste depends on mixing and balancing elements from bitter to sweet plus sour to spicy in one dish. Easy enough for those brought up with the cuisine, but a bit more tricky otherwise.

The Sushi Chef Sushi Kit To The Rescue 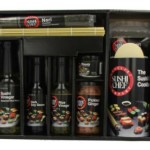 If all that balancing of tastes sounds a bit worrying, do what I did and get a Sushi Chef Sushi Kit (mine was a gift from a friend) the first time you do it – and here’s why…..

When I unpacked it and did a bit of reading, it dawned on me that most of the real flavor and therefore sushi skill if you like, is in blending the sauces to suit the meal. Doh! But basically, there is no way could I have prepared such a great tasting meal from scratch first time, nor probably the twenty-first time. How would I know which sauces to get?

A kit contains everything you need except the fresh toppings. So sushi rice, rice vinegar, nori, wasabi, soy, pickled ginger – all the extras you didn’t even know you needed if you’ve never made sushi before. I believe the Sushi Chef kit comes ready to serve 12 people, meaning we had several goes at it before needing more supplies.

The most difficult part is making the rice, you can read more here on how to make sushi at home which covers the rice in depth. I also gave up trying to roll sushi with a mat – not just because they end up looking like a rolled tortilla, mainly because the mats are so hard to get clean. If the rolling part worries you, consider a Sushezi Sushi Made Easy which is a cute little gadget resembling a small submarine – really inexpensive, this little gem produces perfectly rolled sushi every time.

We’re still using the kits though I do now experiment, adding things like egg and mushrooms to the ingredients provided. I have now tried other kits and to be honest all of them have been pretty good, with Sushi Chef just having the edge – but hey it’s such an individual taste anyway and that is just my (and my other half’s) opinion.

While this post is filed under Fun Kitchen Gadgets it could just as easily go under the gift section – because these kits make such great fun presents too.

If you do decide to have a go with a Sushi Chef Sushi Kit, or anything else you see and like, call back and let me know how it goes okay?