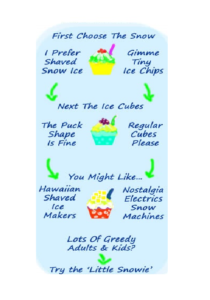 [Updated 1 June 2020]Cleaning kitchen cupboards (actually cleaning anything) is not on my list of fun things to do, but occasionally you have to woman up. It’s hot, the crowd is screaming for snow cones and the darn machine has vanished. Home snow cone machines don’t walk off on their own so there was pretty much only me to blame for it going missing.

And now I’m really in the doghouse, because having gone looking for it, two things have come to light.

Firstly we need a new one. Secondly, if the cupboard/s were better organized, we wouldn’t because it wouldn’t have been broken by someone shoving even more into an already overcrowded space – that will be me again then.

So that’s two jobs I’ve given myself, both urgent, ain’t life peachy?

It All Hangs On The Snow!

Most of the decisions for buying a snow cone machine rest on the quality of the snow you get and the ice you put in it – and by that I mean whether it conveniently takes any old cubes or, you have to use specially shaped lumps of ice.

Choosing a new home snow cone maker isn’t too onerous a task, not like choosing a new juicer, where there are literally hundreds to plod through in your quest for the right one.

Check the easy chart and once you’ve decided on the snow type you prefer, the rest should be easy!

The best snow cone machines I can find for under $50 are below, with the reasons they are looking like a good buy. Reading lots of snow cone maker reviews have helped whittle it down, more by the positive reviews on some machines and lack of anything much on others.

Keep in mind ordering syrup packs to accompany them can work out less or more expensive, depending on the deal included with your choice – there are some really simple snow cone recipes here if you are a newbie cone maker.

Typically I go to Amazon’s best seller list for the item in question, because if that many people are going for it, chances are that brand and model is okay, it’s always a good place to start. 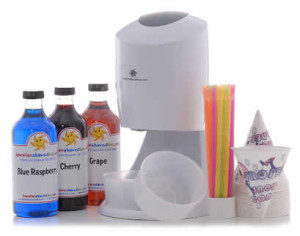 Ordered half an hour ago now, the Hawaiian Shaved Ice Snow Cone Machine beat out the competition by the rave reviews, the fact my sister has one and loves it, plus under $ 50 (for the machine only), it’s a snip.

There are two sizes of the motor which accounts for the different prices.

Here is where you need to match up deals on snow cone syrups, if you intend on ordering at the same time and frankly you can save enough to make it worth doing – how about getting together with friends and splitting a big order between you?

The most realistic fine snow is produced by the Hawaiian, probably because specially shaped ice cubes are held firmly against the blades so the shave is precise.

One cube will make about 4 snow cones. Fast at about 30 seconds for the first one, you aren’t going to be kept waiting around. The other thing I particularly like is the neat easy to store shape, a small footprint is always welcome in the kitchen.

What Puts People Off

The fact they can’t use regular ice from the ice maker, you must use the hockey puck-shaped cubes. I can see how this could be an issue if freezer space is short or you don’t remember to freeze in advance, but for me, this is the best buy at the moment. 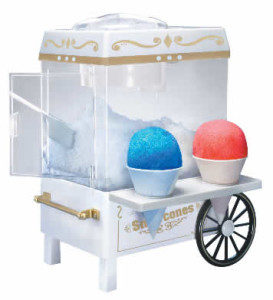 The next choice picked out was this retro snow cone machine from Nostalgia, which I love – and at $35 you really are getting good value. It has nearly 300 reviews, most in favor and I’ll add my vote to that.

Just a note to say private sellers are really cashing in selling this on Amazon for $80 and more – don’t pay much over $40 – you don’t need to!

First place was a close run thing and I’d probably have been as happy with this one, given it’s the same one just pulled in pieces out of the cupboard.

It had an old bread machine dumped on it and something else pushed onto the bread machine, so it got pretty squashed, don’t worry –  it isn’t going to fall apart on you and is well enough made.

What’s Good About This Retro Model

It was robust enough in use over three summers and Christmas parties, producing a cup of ice in seconds – and I know several people who have the Nostalgia machine and have been using them on a semi-commercial basis without overheating or breakdowns, so this one will cope with big families and parties – something I can attest to myself.

You can’t add ice when the machine is on and working – it’s a safety feature which never delayed us, just make sure to load plenty of ice in to start with.

Why not buy an exact replacement if you liked it so much? Firstly because as I mentioned, my sister got a Hawaiian Snowmaker and her whole family reckons it produces the best snow cones outside Hawaii itself.  Secondly, we needed something a bit more compact, the sleeker lines and smaller space requirement of the Hawaiian appliance fit the bill.

Truthfully? Well, if being perfectly honest, I’m a geek who is totally intrigued by the puck-shaped ice.

The Hawaiian gets the best reviews on snow quality but the Nostalgia I broke isn’t far behind it – we all like different textures in snow cones and this is more like tiny ice chips – but they hold flavored liquids equally well.

If you don’t like the look of any of these, rest easy because there are simply loads of other makes and models to choose from and the link will take you to this selection if you want to check the current prices. I daresay they all do a good job and produce icy snow cones for the growing queue of kids which materialize from nowhere the second the ice goes in the chamber!

Looking For Commercial Quality And Size?

I’m updating this post and giving you a link through to a new post on commercial-sized (well bigger anyway) snow cone makers. We have a party coming at the time of updating and hubby wanted a man-sized ice shave to serve 50 – 100 people. There are some hugely expensive models, and some really great deals – go read The Perpetual Snow Cone Maker Sale post if like Al, you want bigger and better than reviewed here.

Now to go chillax with a nice bowl of melon ice.